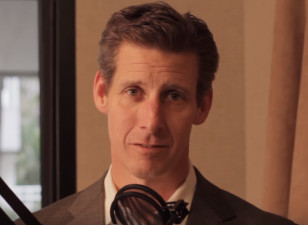 If you’re looking for the latest news on the economy these days, one place you might be turning to is American Public Media’s flagship broadcast, Marketplace.

If so, you’re in the company of an estimated five million public radio listeners* who rely on host Kai Ryssdal to explain the intricacies of mortgage-backed securities, credit default swaps, and the markets.

Ryssdal started his career as many do: as an intern at a public radio station. Unlike most, however, that was after having already been a Navy pilot and a U.S. Foreign Service officer. In 1997, Ryssdal and his wife left their postings in Beijing so she could attend business school at Stanford.

He took a job at a bookstore in Palo Alto, and it was while shelving books one evening — and wondering what he was going to do with his life — that he came across a book listing radio internships. Long considered a “news freak,” Ryssdal decided to give broadcasting a shot. He spent a year and a half schlepping at San Francisco’s KQED before finally making it on air.

Ryssdal moved to southern California and the Marketplace Morning Report in 2001, where he spent four years waking up at midnight in order to begin broadcasting at 2:50 a.m. — which was 5:50 a.m. back east. Ryssdal took over the reins at Marketplace in 2005. mediabistro.com caught up with him to learn how he crafts Marketplace stories that keep listeners tuned in.

Name: Kai Ryssdal
Position: Host and senior editor, Marketplace
Resume: “Starting at the beginning, U.S. Navy (1985-1993), U.S. Foreign Service (1993-1997). Then I managed to get myself an internship at KQED. I stuck around long enough, they finally put me on the radio, and 10 years later, here I am.”
Birthday: October 8, 1963
Hometown: Briarcliff Manor, New York
Education: BA, History, Emory University 1985; MA National Security Studies, Georgetown University, 1993
Marital status: Married since 1997 with three sons and one daughter
First section of Sunday Times: “The front page, then Sports, then the wedding announcements, then Week in Review, then Business.”
Favorite TV show: Lately, Mad Men
Last book read: “Goodnight Moon, to my 1 1/2 year old. Otherwise, catching up on back issues of The New Yorker.”
Guilty pleasure: Peanut M&Ms

Do you have an algorithm for deciding what makes a Marketplace story?

One of the most important things we do is context — to place individuals and companies and the larger economy in their proper context. For individuals, it’s why things like auction rate securities matter, [and] what that will mean for their municipalities as they try to get loans to build a new swimming pool. For companies, what the earnings picture is. For the U.S. economy, what the global economy picture is. There’s a finite amount that anybody can digest. This stuff is dense, and it’s hard, and it’s complicated — and frankly, sometimes it’s not all that interesting. It’s a pretty high bar to get on to the program.

The fact that it took so long for folks to catch on — what do you think that says about the human interest in bad news and/or business journalism’s ability to ring the bell?

This stuff is so complicated, and in this instance so dark and so depressing, that it’s easy not to pay attention. There’s also so much noise out there. The less you personally have a filter — where you say, “I can’t pay attention to that. I’m going to listen to these 14 things today and not the 80 that are out there” — you just get swamped. Then all the information that is out there gets devalued, because there is so much.

I get up really early because out here in California, we’re behind the time zone. By the time I get up at 4:30 or 5:00 in the morning, things are already happening on the East Coast. I get up and digest the news of the day. I start thinking about what the lead story is going to be and what the through-line of the broadcast is going to be. If you think about my job, it’s really to make sure that everybody who’s listening at the beginning of the broadcast is still there at the end. So I have to make that connection between the lead story of the day, the stories that follow in the newscast, and then the features and interviews that devolve throughout the program.

I do a quick check of the markets. I call some people if there are issues or questions about a story that I don’t quite understand, and then our morning editorial meeting at 8:00 gets everybody rolling. We do a pass-down from our overnight shift, the guys who work on the Marketplace Morning Report, so we know what’s been going on overseas and in the overnight economy.

Reporters get assigned, I do interviews or other prep work, and then at noon, I start writing the show. The reporters and editors work to get their stuff in by 1:00 p.m. Los Angeles time, and we go on the air for our first set of broadcasts at 2:00 pm L.A. time. On a not-market-meltdown day, things are pretty calm around here by 4:00 p.m.

I’ve been told the Marketplace broadcast explicitly has a specific persona. Is that right?

There absolutely is a Marketplace persona and a Marketplace voice. It’s something you figure out very quickly when you get here. All our reporters, producers, and editors understand that the thing that makes Marketplace is the sound. It is the irreverence, the wit, the accessibility, the humor, and when needed, a bit of edginess that makes these stories we do listenable. It’s absolutely something we concentrate on and work at very hard.

Who figured that out?

It’s been that way at Marketplace for 20 years. When Jim Russell and J.J. Yore started this program, they deliberately started out to do a business program that was not straight numbers and straight stocks and all that not-so-interesting stuff that other business programs are. It has carried through 20 years amazingly successfully because we all realize that this is our niche.

What stories have most resonated with listeners?

The stories we did from China two-and-a-half years ago, even today. I was in Baltimore recently, giving a couple of speeches, and people were still coming up to me, saying, “Those China broadcasts were just the most amazing thing I ever heard.” But point out any story in the last four months for sheer impact and importance, and you can pick those as well.

What advice would you give to someone who wanted to follow in your footsteps?

You have to do whatever makes you happy. You can’t replicate what I did because I got unbelievably lucky. I was in the right place at the right time and willing to make a change and take some risks. When I came here to take the Morning Report job, I was married, I had two little children, and I was getting up in the middle of the night to go to work. You have to be willing to do whatever it takes. Never say no. If someone says, “Can you come in on Sunday and go to Chinatown to get us some tape for the Monday broadcast,” you have to say yes. And that goes now more than ever in journalism, when it’s so hard to find really good work. If you have an opportunity, you absolutely have to grab it.

Was there anything you learned in the Navy that is coming handy now?

Discipline. Getting up at midnight to go to work for four years in a row takes a certain amount of discipline. Writing on deadline every single day takes discipline.

Who do you see as Marketplace‘s main competition, and how do you think you’re doing against them?

Our competition comes on two levels, really. On the macro scale, we’ve got to deal with the same issue everyone else in journalism does — the sheer amount of information that’s out there, online, on the air and on paper — and how to make ourselves stand out. More specifically within public radio, business and the economy is the story right now, and a lot of other programs have raised their game. I think the things that have set us apart from the beginning — our attitude, how we go about telling the stories behind the numbers and statistics — have really helped keep us ahead and set us apart.

What about your future? You’ve already had three or four careers. Do you think you want to do something else down the road?

There is nothing I’m not willing to try. I got into radio because I think it’s fun and interesting. But there’s a lot going out there.

What’s a blog or news source where you get really interesting news, insights, and tidbits from, that the average person might not be aware of?

Planet Money at NPR because Adam Davidson is a) a friend of mine and b) really creative and talented.