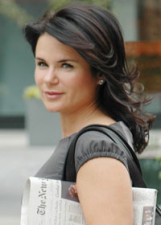 You could say Nicole Williams was born to be a career adviser and motivator. Watching her mother toil away at an unsatisfying job in a small town in Canada was all she needed to spark her own desire for a fulfilling career — and to help other young women land and excel in jobs they love. Her dream came to fruition with the launch of her website, WORKS by Nicole Williams, which offers lifestyle content for career-minded women in their 20s and 30s.

Williams has written three best-selling books on her area of expertise, the latest of which, Girl on Top: Your Guide to Turning Dating Rules Into Career Success, has been optioned for a film by Academy-Award-winning producers Dan Jinks and Bruce Cohen. Williams is also a frequent contributor to women’s service magazines, newspapers like U.S. News & World Report and shows like Good Morning America and The Big Idea with Donny Deutsch, so it’s no wonder “the world’s largest professional network,” LinkedIn, tapped Williams to be its official career expert. Here’s how Williams started her business and what you can do to optimize your own success. 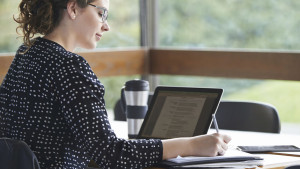 Tell us what led you to start your own lifestyle brand, WORKS by Nicole Williams?

Essentially it was a personal experience that launched this company. I grew up in a small town in Canada, just across the border from Detroit, a very blue-collar industrial town. My mom worked in the local paint factory, which pretty much everyone in town did.

When I was a little kid, she would come home and drop off McDonald’s and head to the casino or bar or whatever was up for that night, and I could see the degree to which working in this capacity that didn’t fulfill you, that didn’t excite you, really affected the rest of your life.

Seventy percent of your waking life is spent at work, so if you hate your work, you’re inevitably going to not enjoy the rest of your life. And so I was very young asking the question of anyone who would answer, ‘What do you do for a living? How did you get to do that? Where did you go to school? How much do you make? What kind of skills do you have?’

My first career job was with the Canadian National Institute for the Blind. I was their director of career and technology. From there, I just used my own career as a testing method.

I’d be like, ‘OK, how do you get a raise? Well, let me try this, let me see how this works…’ And I think what I realized is that, for a lot of young women, it’s not about building a resume. It’s a lot of soft skill; it’s a lot of just the person you are and the people you surround yourself with. You know, those elements have so much more to do with your potential for success than pretty much anything else.

So I was always focused on more of the lifestyle elements of career, and that’s how this business came to be.

How did you eventually branch out on your own and come up with the concept for your business?

I stayed [at the CNIB] for about a year and a half, and what happened for me was I loved working with individual people on their career. It was truly thrilling.

But at a certain point, I started to understand that I wanted to create content that would help more than just one person. And at the time, our program was federally funded, and the program was being audited by an outside consulting firm and they looked at one of the programs I developed and they decided to institute that nationally. And that was sort of my first foray into more of a macro level of career development.

I was looking at Martha Stewart’s model of taking content that an individual can consume and use to better her life and bringing that to the masses. Her model is, frankly, quite brilliant. And from there, I was like, ‘OK, could this be a book? Could this be a television show? Could this be a line of career clothing?’

And essentially, that’s what I’ve built. I did a line with The Limited, I have three books, one of which is being turned into a movie.

What do you consider your career philosophy?

It’s funny, the time at which I was thinking about this business and [my first] book and could I grow this, I remember one of my friends was reading Jitterbug Perfume, by Tom Robbins. And I read these two sentences [that resonated with me]: ‘The price of self-destiny is never cheap, and in certain circumstances it’s unthinkable. But to achieve the marvelous, it is precisely the unthinkable that must be thought.’

You know, no one in my family had gone to [college]. It really was unthinkable for me to have graduated university, to have worked at the CNIB. These were jobs and opportunities that so far exceeded what the expectations were for me in my life.

That somehow is true to the way I want to live and the philosophy I want to espouse as part of this business. And literally in that day, I wrote down a list of everything that was unthinkable for me, and it included being on the Today show, it included creating a television show for the Oxygen Network, which I ended up doing. It was to publish with the largest publishing house in the world. It was to get a six-figure advance. These were all jokes at the time.

And as I started to accomplish those unthinkables, I started to really develop that philosophy as it pertains to career. So I’m a big believer in stretching that muscle. And, yes, there’s work attached to that. It doesn’t just come true because you believe that it will. But it’s essentially an orientation that helps you to see opportunity in the world that you might not otherwise.

How can job seekers market themselves during these tough economic times?

Ten, 15 years ago, when I was getting my book published, the vice president of Penguin was sitting in on my meeting. And for some reason, I had done an Internet search and knew that this guy came from Toronto, Canada, which is where I was born, and it was that affinity that allowed me to get a record-breaking advance. We got a quarter of a million dollars for a book on careers, which never happens!

Use every method possible to prepare yourself and then to market yourself so that you’re someone that gets noticed. There are opportunities out there. And sometimes in a bad economy there’s actually more opportunity than less. It’s just a matter of going after it more strategically.

And I think now, because of the Internet and social media, that ‘strategically’ becomes much easier because there’s a platform like LinkedIn, where you’re able to really create a professional brand from soup to nuts and demonstrate who you are as a professional, upload examples of the work that you’ve done, and put that along with an amazing photograph that allows an employer to envision you in this particular situation.

As LinkedIn’s career expert, give us your top three tips for optimizing your profile.

OK so the first is a picture. Profiles that contain a photograph are 11 times more likely to be viewed than those that don’t. And I use the analogy of either the online dating site or the real estate site, where you’ve got this wonderful description, but no photograph. And your instant fear is that it’s decrepit, like there’s a reason why there’s no photograph, and/or it’s not legitimate.

And this profile shot is meant to be professional. A lot of young people I encounter, they’re taking the picture of themselves on the beach, or with their boyfriend, or with their dog, and those kinds of photos in this instance are really, frankly, inappropriate. It doesn’t have to be a professionally taken headshot, but you want this to exude some level of professionalism. I like smiles. I think you can exude a lot of energy when you smile.

Secondly, people think that, ‘OK, I’m just going to post my most recent position.’ But in a lot of instances, employers are looking for someone with 10 years’ work experience, and a lot of the skill sets are transferable.

So even though you worked in marketing and you’re looking for a web design job, you definitely want to have both of those opportunities listed. And we know that profiles that list more than one job are 12 times more likely to be viewed by a hiring manager.

This is kind of different than what we were accustomed to in a resume, in which you only had one page. In this instance, you’ve got as much space as you need to demonstrate who you are as a professional. You also want to upload presentations, works, decks, your portfolio. Allow your work to speak for itself.

Then share content. LinkedIn offers an influencer program whereby you can essentially get mentored by these amazing business people, like Bill Gates and Meg Whitman, and you can literally just share an article, share a quote of inspiration. Sharing [content] demonstrates that you’re active in your career, you’re invested in your career and you’re not just looking to take.

So what’s one big mistake that LinkedIn users often make?

Well, definitely it’s using the connection request that’s just the standardized, ‘I’d like you to be a part of my network.’ At the end of the day, this is a valuable request, and you’re making it of professionals who you have some relationship with.

And I think one of the things that’s much different in the usage of LinkedIn versus Twitter or Facebook, it’s all about quality. It’s not about quantity. You could have 1,000, 2,000, 8,000 connections, but if none of these are people who know you as a professional, trust you as a professional, are willing to look out for opportunity or answer a professional question or introduce you to someone, they’re worthless.

So I’d rather someone have a smaller concentrated number of really valuable connections versus mass connections.

What else do professionals need to keep in mind when using social media, in general?

Our personal lives are connected to our professional lives, and they tend to overlap in ways that we wouldn’t necessarily expect.

But just because it’s on Twitter or Facebook, don’t think that that space is personal so you can have whatever you want up there, because you’re still going to be judged by it. When it comes to your personal stuff, get a diary. You know, write some letters to your friends. Get a Gmail account that’s not attached to your company’s website or URL. Don’t think of social media as a personal place. I think that’s incredibly naïve.

Editor and Proofreader
Marquis Who's Who Publishing-In business for 120 years
Uniondale, NY