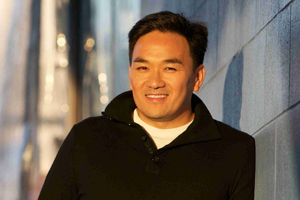 Even as a child, Toan Lam knew he wanted to tell stories. He grew up in a rough neighborhood in South Sacramento, Calif., and used reading and writing as an outlet—and eventually a passport out of dodge. He worked as a TV reporter for several years before deciding he wanted to tell only inspiring stories of people doing great things that might compel others to do the same. He founded Go Inspire Go (GIG) to accomplish this mission. The nonprofit social-activism site started out as a single YouTube page and, in four years, has grown to 90 volunteers—including members from some of the top tech companies in Silicon Valley. They have documented and shared over 60 charitable acts and counting.

“People think to be involved in philanthropy, you have to be rich, old, snotty,” says Lam. “And no, you can be a philanthroper and you can be little Phoebe Russell, a five-year-old kid who wants to help people in the food bank.”

Lam calls himself the “chief inspirator” for GIG, but adds that “we all can be inspirators. We all have the power to do something both big and small.” And he hopes to extend his passion project’s reach. He is currently in talks with a few networks about developing a TV show based on his idea of inspiring the masses through everyday heroes.

Name: Toan Lam
Position: Founder, Go Inspire Go; university instructor
Resume: Started TV news reporting in 2001 for an ABC affiliate in Wausau, Wis. Also worked as a reporter for an NBC station in Los Angeles; an NBC station in Midland, Texas; and then a CBS station in Fresno, Calif. While a reporter at an independent station in San Francisco, Lam got the opportunity to report for a worldwide syndicated show on Asian-American lifestyles called Pacific Fusion. Afterward, he hosted and reported for a PBS show called California Heartland. In 2009, he founded GIG. And today also teaches multimedia at the Academy of Art and blogging for social change at the University of San Francisco.
Birthdate: Jan. 22, 1978
Hometown: Sacramento, Calif.
Education: University of San Francisco
Marital status: Single
Media mentor: Oprah, Arianna Huffington and “storytelling king” Steve Hartman
Best career advice received: Follow your passion. It’s easier said than done. Find a way to make it work.
Last book read: The Power of Now by Eckhart Tolle
Twitter handle: @GoInspireGo

Why did you leave TV reporting to pursue social activism?

I believe that everything in your life is like scattered dots that you throw behind you and you don’t know what all these experiences mean, and one day you’re able to connect the dots. I saw all these stories of everyday people doing awesome things for other people, and I researched and I was like, whoa, there are inspiring sites and people, and they share other people’s articles. But what if I had the audacity to dream bigger and use my power— which I believe is connecting people through storytelling—for good? And so, you know, I didn’t want to do car chases and murders and political scandals anymore.

Wow, what if, instead of bringing that into people’s living rooms, what if I brought good news into people’s homes? So I thought, ‘Well, I’m going to quit my job in a month.’ It was December of 2008. I’m going to take six months to a year, and I’ll live off of the little savings that I have and just go out and tell these stories. And it was a hobby. I thought it would be fun. My dream job would be going around and interviewing people that are doing awesome things. I just wanted to inspire people to also then use their power to help other people. Guess what? Next day I go in, I get laid off. [laughs] And I was like, ‘Whoo-hoo, this is awesome!’

So then how did you get started with your new mission?

So it was just me and an intern, January 2009. And I didn’t know what I was doing. I was at a cafe and I said, ‘I’m just going to create a YouTube account, and start going out and covering everyday heroes that do small things that ripple out to meaningful changes.’ And as I had more and more conversations with people, I started discovering a pattern and I thought, well, what if I went out and I spent time with these people, and really got to know them, not just a quick 10-minute interview, but we spent the whole day with them?

And something magical happens when you make that human connection and you’re no longer a stranger. You almost become like a friend. And what if I told their authentic story, both in a blog and a video? And I was like, ‘Let me think of this algorithm: Tell authentic stories plus leverage social media equals people taking action.’ And I realized that there was a huge need for that. Because when you can tell a good story, any industry that you’re in, you can convince people that ‘Hey, you know what? You matter.’

How did your past play into your desire to tell these stories?

I was born in Vietnam. At eight months old, my dad brought me and my sisters and brothers—there are five of us—to South Sacramento, with my grandparents and an aunt and uncle, and 10 of us basically crammed in a trailer park. And then we went from bad neighborhood to bad neighborhood. So me, being a Chinese boy, the only person that I saw of color on TV that I made a connection with was with Oprah. And Oprah’s a black woman and from the South! I realized that she told people’s stories that connected people from all walks of life.

My parents wanted me to be a—my mom says, in the cutest Chinese accent, ‘Doctor, lawyer, engineer,’ in that order. And little old me here loved to read, write and talk. I read everything I could get my hands on. And that was not validated until I got into college, and I had this teacher by the name of Carolyn Weber, and she was getting her doctorate at Oxford, and she was doing a sabbatical and teaching at the University of San Francisco. So my heart was palpitating when I signed up for this class, and the first week she says, ‘I want you guys to write your first assignment, a one-page autobiographical snapshot of a moment in your life that was a big deal to you, that changed your life.’ And I forgot what I wrote.

Honestly, I just wrote it real quick and I turned it in and I didn’t even want to show up to class the next week. She gives me the paper back and she looks me dead in the eye, and she goes, ‘Lovely job.’ And in perfect red penmanship, right in the center of the paper, she said, ‘You’re such a gifted and lively writer. What will you do with your talents?’ For the first time, somebody acknowledged me. And so I just thought, wow, I want to go and be a print reporter and just write these stories. And I ended up getting jobs in TV as a matter of happenstance, and realized that I can use this power for good.

I want to say we launched in March of 2009 as Go Inspire Go. And the idea is, again, ‘Go, get up, get inspired and go and use your power to help other people.’ Four years later, we have over 90 volunteers from around the world. A lot of them from different tech companies, too—LinkedIn, YouTube, Yahoo, Google. And somebody from the World Economic Forum sits on my board. We turned it into a nonprofit, and we have made over 60 videos so far, and we’ve done over a million dollars’ worth of volunteer work thus far.

Tell me about some of the stories you’ve covered.

One of the highlights is we sent 32 kids to school in Haiti for a year. Our most popular video thus far (it was picked up by Good Morning America) is about Jorge Munoz, a school bus driver by day, but known as the ‘Angel in Queens.’ For over a decade, he goes and buys enough groceries to feed 150 people, and he and his family cook. At 9:30 every night he drives his little white Toyota truck out to the subway stop in Queens, NY, and gives it out to people that need it. Over 150 people, every night. And he’s missed one day because a snowstorm shut down all lines of transportation.

Why do you think GIG has made such an impact on people?

At the core of who I am, I’m a teacher. And I’m a seeker. And that’s what I’m doing and, you know, it’s a really basic concept I think. And it’s grown so much, because I believe that when you take action based on what’s authentic to you, your power and your intent, and it’s in alignment with who you are and what you’re supposed to be doing, it grows naturally. And, you know, four months into this Arianna Huffington emailed me and she was like, ‘This is lovely. Will you share?’ So I’ve been blogging for her for four years [on Huffington Post]. And also Deepak Chopra’s community—he and his daughter have this site called Intent.com and we share our content there as well.

I always ask people ‘What can you do?’ Smile at somebody, give somebody your food. Treat somebody, the homeless person, to a meal. I don’t know. Do—and it doesn’t even have to be that big. When people see you doing what you love and you’re helping people, there’s something amazing in that. And when you can—when you’re able to tell that story and then share the love on social media, the impact is just exponential.