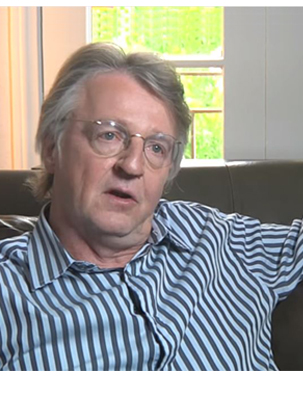 Shot on location in Ireland, History Channel’s Vikings looks and sounds a lot like the 2000 film Gladiator, right down to the shifty clan leader Earl Haraldson and tormented protagonist Ragnar Lothbrok. And thanks to writer and executive producer Michael Hirst—the man who brought you the Cate Blanchett film Elizabeth and Showtime’s The Tudors—the series also has the same potential for critical and commercial success.

“My instinct is to absolutely recoil when talking about writing in a mechanistic way,” Hollywood’s go-to guy for historical fiction told us. “Nothing could be dumber than writing a film or TV script based on prescriptions, on other peoples’ ideas of what character should be.”

How did you first break into the business?

I’d always been a writer, but I was really an academic. I had been in university for years and years and was going to be an academic, but then I met the film director, Nicolas Roeg—great guy, he did The Man Who Fell to Earth—and he read one of my short stories. He asked me to write scripts for him, and I replied that I had no idea how to do a screenplay, and Roeg said, “That’s perfect.”

He showed me a couple of films by Bunuel and Cocteau that had nothing to do with the project. And also, at the time, they were shooting the first Superman movie in England, and Roeg was working at the studio, so we walked down “Fifth Avenue.” And he said, “This is the movie business. This is where we kneel down. It’s absolute magic.” So he inspired me in these ways. I then wrote a couple of rather complex scenes. Nic read them, opened the window and threw them out into the street. “This is not interesting,” he said. “It has to be something that excites me.”

What advice would you give to a journalist interested in writing historical drama?

The key for me with historical characters is they’re interesting because they’re human beings.

A little bit of Hemingway goes a long way here, but journalists and writers should honestly look at their material and have a real interest, a real passion in what they want to write, and they should also have a lot of knowledge, as well. You don’t write police procedural stuff unless you really know that beat, but it’s ultimately not the procedure that makes the show work—it’s the people. The more real they are, the better.

I advise people to even look at their own family and people they know. Get to be a spy and always be looking out for peculiarities in individuals. I hate the idea of going the other way and adhering to some supposedly tried, true format.

I still have no idea how to write a screenplay. I know I can do it now, and I know that each of my episodes has got to have something in it that is exciting and, ultimately, impress Nic Roeg. That’s the key thing: if I showed it to Nic, would he be excited?

Other than that, just try to write so you get people engaged. I learned a big lesson once from Indian director Shekhar Kapur. He said: “You English, you’re so constricted. You don’t really show your emotions much. Melodrama is actually what everything is about. You should be melodramatic; you should just leave a little bit out there, a little emotion.”

For a project like this, I try to get hold of everything I can and have an open mind, at least at the beginning of the process. As far as what I’m going to do, and who are going to be the main characters, where I’m going to take it, and so on. The creativity comes from all these ideas and thoughts tumbling over each other in the darkness.

There is also great value, on previous projects and for Vikings, in all these little footnotes and anecdotes, little things, human details that often don’t interest historians but interest me. There isn’t, of course, a huge amount of material about this era. The Vikings certainly didn’t write anything about themselves; it was not a literate, but rather a pagan culture. So what we get was written later by Christian monks. But there were occasional reportings and recordings of people who had traded usually with the Vikings.

One of the most important sources for me was an Arab trader. There were a couple of things that he reported, which occasionally kind of staggered him. One of them is the scene in episode two, on the jetty, when the Vikings all share this bowl of water—they comb their hair, they spit into it, they clear their throat into it.

Although it seems rather unpleasant, the Arab trader described that it was very strange to him, because on the one hand they were being very clean by combing their hair and yet they were also spitting into the same bowl. And for me, that stuff is golden, because I’m always looking for that sort of ballast to put into a show. These are real details, and I don’t really have to make sense of them to use them. This is what someone saw; this is what the Vikings actually did.

How involved were you with the casting process?

Decisively and as much as possible. I don’t watch enough TV and film to have a comprehensive knowledge of actors working today, but, once the casting people narrow it down for a role, they’ll come to me and say, “Have a look at these people. What do you think?” and so on.

But I’ll tell you one story. We did have huge trouble, and go to great pains, casting our lead male Viking character, Ragnar. I knew I wanted someone that was different than the usual hero. We saw lots of different actors, lots of Scandinavians and also an enormous amount of very pretty English actors. There was no one who sang to us, but there was a guy who was very good and who got the OK from the director after final reading.

This actor didn’t sort of set my heart on fire, but I said yes. These things come under time pressures and if you don’t have your lead actors by a certain point, obviously, then you can’t do the show. Just before we had to have our minds set, my wife said, “Just show me this guy’s reel again.” So we watched the footage again together, and she said, as a woman, that she wouldn’t want to see this guy every day on Vikings. My wife said, ‘He’s not my idea of a hero; he has too many mannerisms; he’s learned a lot of that; he’s inauthentic.”

So, for once in my life, I exercised the little power that I have and said we can’t do the show with this actor and, I think, two days later, Travis [Fimmel] sent in his reel. And he was the only guy who didn’t try and “act.”