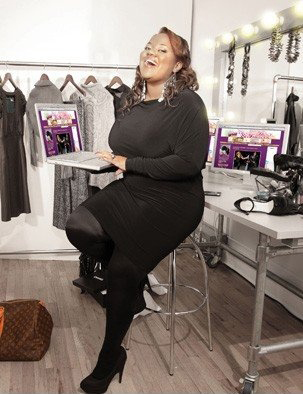 When gossip is about you, it’s generally a bad thing. When gossip produces the spoils of a million dollar brand, it’s a good thing. That’s the end Natasha Eubanks doesn’t mind being on. The blogstress and entrepreneur launched The YBF (that stands for The Young, Black and Fabulous) back in 2005 when she noticed major online outlets weren’t discussing the who’s dating who and who’s dissing who in African-American celebrity-dom.

Now her site is pulling in some 15 million hits a month. “Just today, I had an hour-long meeting because we’re growing more than we thought. And when Whitney Houston passed, our site totally crashed,” says Eubanks. The 29-year-old has developed a formula for blogging success: keep readers abreast of what’s going on in Black Hollywood, inject a personal opinion, and use a chatty style that makes folks feel like they’re talking to a close friend rather than a red carpet prowler. This isn’t your high school locker room gossip; it’s Hollywood buzz. And Eubanks is proof positive that it’s big business.

Name: Natasha Eubanks
Position: Founder, The YBF.com
Resume: Worked as a hostess at Olive Garden while waiting to start law school at Loyola University. Made the YBF her full-time job just one year later.
Birthday: May 1
Hometown: New Orleans
Education: Bachelor’s in political science and English from Texas A&M and one year of law school at Loyola
Marital status: Single
Media Idol: Tyler Perry and Cathy Hughes
Favorite TV shows: Say Yes to the Dress and The Game
Guilty pleasure: Anything luxe (especially Chanel) and laid-back, do-nothing days that consist of snacks, her boyfriend and a movie marathon
Last book read: The Tanning of America by Steve Stoute
Twitter handle: @TheYBF

How long did it take you to realize that you were sitting on more than a hobby, and when and how did you incorporate advertising?

I think I incorporated advertising from day one. I started with Blogger. They were bought out by Google and Google controls AdSense, and that’s probably the easiest ad platform. It was pretty much presented like, “Check this box if you want to do Google AdSense.” I didn’t make a penny off of anything because I didn’t have any readers. I didn’t see any money until two years, and I only saw a few dollars even then.

But I saw that and I think that kind of sparked it in me. I was like, wait a minute. There’s an ad platform? What does that mean? You can make money just by writing what you think? That’s insanity. I’m just some ol’ girl off the street who talks about celebrities. The fact that I didn’t make anything, I didn’t think it was really real.

You know those “make money working from home” type things? You know, filling out surveys type of things? But then I saw that it was even a possibility, so that’s when I started looking for other ad platforms. When people started approaching me, I thought, ‘well, maybe I’m reaching more people than I think.’ I still don’t feel like I’m sitting on a goldmine just waiting to happen. I don’t think I’ll ever feel like that.

Print magazines have beefed up their online presence and other entertainment sites have cropped up. Do you see them as competitors or do you appreciate them for fleshing out an underserved field in African-American entertainment?

I definitely appreciate them because most of them are magazines I grew up reading, though I wish they would’ve done it earlier. We don’t see them as competition at all; we actually work with several different magazines. They’ll give us their covers first or send us excerpts of the people they interview. They can add a different aspect to our blogging. I’m a huge proponent of staying in your lane.

We’re reporters in a way, but we’re not hardcore journalists, you know? We do the most research we can do, we get the most facts we can get, but at the same time we’re not supposed to be this strict, by-the-book journalistic entity. That’s not what the blog is here for.

It’s here for our subjective view, not an objective view like they have to have. We talk about random things; we don’t have to make sense; our stories don’t have to flow. Magazines are held to a different standard and they should be. Sometimes it’s good to have Essence or Vibe give us information, but we’re just as much of an asset to them as they are to us.

I think we’ve run into fewer legal problems, because we’re not one of those sites that just writes everything we hear with no regard. We don’t just make things up out of the air like some sites, and when we talk about certain things we have learned how to word them so that we’re not necessarily held accountable.

There are just some things we won’t run on the site, even if it’s true, and I think that’s kind of saved us from massive legal trouble. But there have been instances where people got upset because we aired them out. We’ve gone through lawsuits and legal threats. It’s just part of the game.

What type of brand extensions do you have planned, and what are you looking to accomplish? Does that mean expanding out of Black entertainment?

I don’t like to talk about things until they’re done but, generally speaking, I want to make us that one-stop-shop household name. I know some people think we already are maybe with certain groups and people, but I want people to ask, ‘where can I turn on my TV and go on the net and turn on the radio and physically go that the YBF brand will give me what I need?’

I don’t think I need to expand out of Black entertainment. I think Black entertainment is such a broad topic. Some people try to make it narrow, but I never want to get away from the reason why I started the site. I do want people to think of us first when they’re trying to figure anything out that has to do with celebrity entertainment.

If you could tell an aspiring blogger to invest in just one part of his or her site, what would it be and why?

I started on a zero budget and made no money for two years. It can be done. I would say if you’re just starting out it depends on how hard you want to work, if it’s something you’re really going to give 120 percent to. I did everything by myself, so it was my priority. I used a free [blogging] service so I didn’t put any money into that.

It’s just you and your computer, so you can just save your money. Try to find people, maybe interns or people who are just starting out, who you can barter your services. They can build you a website; you can put their name all over the website.

Just try to do things in the cheapest, most legal way possible. I think the biggest thing is realizing when you need to step it up. Don’t just stay cheap forever. When I realized that it’s all great and good to not pay to do certain things, I noticed that it ends up being wrong; it ends up costing me money in the long run.

That’s why I say ‘the cheapest labor is the most expensive labor.’ Don’t do this whole Field of Dreams, “I’m going to have this big, huge website, and I’m going to throw $50,000 into it, and if I build it, they’ll come.”

Don’t even go there.

Do what you’re going to do as streamlined as possible and, as they come, that’s when you build. Don’t do it the other way around.