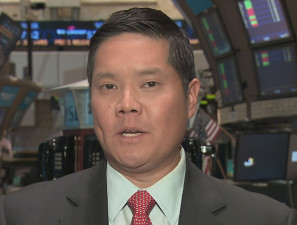 By day, Dominic Chu is the smiling, now familiar face delivering the latest news on stock, bond and currency markets, but, generally speaking, he is a master of career reinvention.

After a stint as a budding chef at Cornell University and success on Wall Street as a trader and investor, Chu made the jump to TV in 2010 after responding to a casting call embedded in one of the tickers on Bloomberg.com. “They held an open audition for people who had Wall Street experience to come in for a possible career in media,” he remembers. “They ended up going through this whole interview process with an audition at the end and selecting people to come on. I was one of them.”

Today, skills gained from those seemingly unrelated positions come in handy daily on the CNBC set. Plus, says Chu, “I make a mean Osso Buco.”

Besides your obvious knowledge of the material, what did you bring with you from your finance career that made you transition fairly easily into television?

You know what I think it is? There are a lot of similarities between a full-throttle newsroom and a trading desk on a trading floor. You’re being blitzed with all kinds of information, and you have to make heads or tails of it in a coherent fashion in as quick a time as possible.

It’s kind of like trading during times when there are volatile markets or big economic data releases. You have to deal with lots of information on a real-time basis. I think that that was probably the thing that most prepared me for this kind of job, because in an organization like Bloomberg you’re dealing with a lot of breaking news all the time.

You were on air during the Flash Crash in 2010 when the stock market plunged 1,000 points. What was the most challenging thing about covering that day and how did reporting on such a pivotal event make you a better journalist?

That was where I really cut my teeth in terms of journalism. It was definitely a very fast and furious situation. Things were literally happening not in hours or minutes, but seconds sometimes. It was a bit of an adrenaline rush, because it was historic just by the sheer volatility. Probably one of the hardest parts was trying to stay calm and be able to deliver some kind of message that was understandable to the audience.

Everything comes so fast these days that you have to make sure that you understand what’s going on yourself before you just have a gut reaction to something. For me, it really was a test to stay on task and a defining moment in a career that was obviously very, very young in terms of age. But, to look back on it now, it was great to be involved in such a historic event in real time and to have viewers and listeners count on me to give them information.

You spotted an ad for your current position in a news ticker and auditioned. Have you had to work harder for respect as a journalist because of the way you came in?

I think that there are two sides to that as a journalist. You bring a different perspective to news you’re covering, one where you used to be a client of the news and now you’re delivering the news. On one hand, as you said, you feel a sense of having to prove yourself. There are obviously a number of great journalists, especially in business news, that I have grown up following. On the other, you’re trying to compete and help people better understand you as a journalist and, hopefully, that leads to respect as a contributing member of the media.

Diversity is always a big issue in media, making sure that there are different voices behind and in front of the camera. What do you think finally has to happen for this to be a non-issue and for the newsroom to truly be diverse?

It depends on what your definition of diverse is. Sitting right next to me are people of South Asian descent, other people of Asian descent, African-Americans, Hispanics. We have men and women, people of all religions from the West Coast, Midwest, East Coast. I don’t know how to say this without sounding cheesy or cliché, but I honestly feel like our newsroom is strong because we have such different backgrounds and points of view.

In general, for the whole field, do you think all voices are being represented as well behind and in front of the camera?

I think so. Our perspective as a news organization has always been to present the facts and provide some insight into where we think those facts can lead. One of the things that I’ve heard a lot of feedback from traders, market professionals and investment managers that we talk to on a regular basis is they appreciate the fact that we don’t have a huge amount of editorial content. We’re not leaning far one way or another in terms of the political or economic view spectrum.

Rather than try to project or use it as a bully pulpit to further some kind of agenda, what we have right now is an organization that can provide you with some kind of data you need to make decisions in your life financially and take control of your own destiny.

If you were head of a journalism school or program, how would you prepare students to be in this field? What did you have to learn on the ground that you wish you would’ve known beforehand?

I don’t think any kind of broadcast media job is ever easy right off the bat. I came into this role with no real experience with broadcast journalism. I’ve done public speaking before but nothing really prepares you for what it’s like to stare into a camera lens and know that you’re on live television. I think for me, the hardest thing to get used to at first was this idea that when you’re going on air, you have to be “on” right away.

For live television, there is no double take, no stopping and starting over. You just kind of have to deal with it and move on. I wish I would’ve been a little bit more geared up, prepared. It was definitely a rude awakening. I had butterflies in my stomach like I couldn’t believe. You slowly but surely get used to it and luckily, the more you do it, the easier it gets.