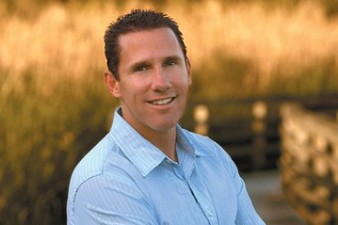 He’s been called the “King of Romance” but he rejects the title. People deemed him the “Sexiest Author Alive,” yet he’s a happily married father of five who is equally faithful to his small, North Carolina hometown.

He’s been called a sappy, saccharine writer, yet with 16 bestsellers to his credit, he is undoubtedly the go-to guy whenever Hollywood wants a love story. (The Notebook, anyone?). But who is the real Nicholas Sparks and how did he go from pharmaceutical salesman to multimillionaire? Having met the Safe Haven author and his wife a couple of times, I think the reason for his success is simple: likeability.

Name: Nicholas Sparks
Position: Novelist
Resume: Wrote The Passing as a freshman in college, but never published it. Followed with The Royal Murders in 1989, which received numerous rejections. Worked odd jobs in everything from real estate and restaurants before starting a business manufacturing orthopedic products. Co-authored Wokini with Billy Mills, sold orthopedic business, and entered pharmaceutical sales. Decided to give writing one last serious try in 1994 and penned The Notebook, which was sold to Warner Books for a cool million. Scored 16 more New York Times bestsellers, including six film adaptations.
Birthdate: December 31, 1965
Hometown: Toronto
Education: University of Notre Dame
Marital status: Married

You worked for years as a traveling pharmaceutical salesman before striking gold with your first novel, The Notebook. How did you stay motivated to continue writing during that time?

I suppose the biggest challenge was the simple fact that, at 28-years-old, I had realized I didn’t want to move my family every couple of years. I also knew at the same time that I didn’t want to be a pharmaceutical rep for the rest of my life.

So, I had an epiphany. I said, “Okay, I’m going to give writing another shot” and you know, I came up with the story for The Notebook, and I had two small children at that time. I had from 9 pm to midnight to work and so I did, three or four days a week. Six months later, I had finished the novel. Three years prior to that, I hadn’t written a thing.

You’ve said that you consciously chose the love story genre because there was little to no competition. What is the most challenging aspect of writing the modern day love story?

What other genres do you feel are untapped and might be good for aspiring writers to enter?

I think there’s always room for a great historical fiction. It is a very challenging genre because in a different way it requires a little bit more research than something like mine would, because you have to, of course, get the historical period accurate. But it’s a genre in which I’ve read a lot of interesting novels.

For instance, The Alienist by Caleb Carr was a great historical fiction or Gates of Fire by Steven Pressfield. I think there’s always room for quality writers in that genre.

You have over 16 bestsellers, many of which have become blockbuster movies. How do you choose your storylines so that they cross over well into films?

In the end I don’t know, to be quite frank, so I just try to write the best novel that I can. I have been fortunate in Hollywood; there’s no mistaking that, and you can chalk that up to working with really great producers who made really great films. I have had more than my fair share of luck. But it’s a general rule [that] whenever I conceive of a story, it is primarily as a novel.

Certainly some novels that I was sure would sell didn’t sell in Hollywood — The Guardian or The Choice, for example. I was sure those two would sell but they didn’t. So, you take the good with the bad, and you just keep writing your novels.

You’re also a father of five, including twins. What tips do you have for writers who are juggling family life and their dreams?

You have to set aside time. I mean, you can have plenty of time for both. You just have to give up something else. You might have to give up television or reading the newspaper or things like that, you know. If you’re serious about writing, there’s enough time. If you take away, let’s say, nine hours of working and commuting and eight hours of sleep — and not everyone even gets eight hours — you still have seven hours left in a day to eat and exercise.

Even if you’re down to five or six, you can spend time with the family. You can still squeeze in time to write. For instance, I did it when my wife was going to bed early. You can also get up very early and write before you go to work.

Do you ever incorporate anything from your own romantic life into your books? Where do you get your inspiration?

You know, not necessarily. Some of my stories have been family stories but as far as my own romantic life, I guess the closest you can say about that is that most of the women characters in my novels are very similar to my wife in a lot of ways.

What is your writing process like, and how do you create your characters?

Well, I usually start with a series of “what if…?” questions, and I look back on the work that I’ve done, and I try to find an area that I haven’t covered before. It could be an age group, because every age group faces different dilemmas. And once I have a good idea of what I want, every character needs a character arc whether it’s redemption or hope or loss or death. Then you just start filling in the details.

The one thing I’ve learned about writing is there is no correct way to do it. Stephen King swears he doesn’t know the end to his novels before he starts writing them. I can’t imagine writing that way. John Grisham does a 50-page outline. I don’t outline -– not one page. It can take anywhere from two weeks to two or five months to come up with not only the characters, but every element in the story, and to know every arc of every story and every character and how these things will play off each other.

And all of that’s done in my head.

What is it specifically about the “romance” label that bugs you?You infamously refuse to write storylines about infidelity. Why did you make that decision, and how do you balance writing about your own interests with those of your audience?

In any love story you need a conflict, something that keeps the characters apart. And, without any conflict at all, there’s no drama in the story. So the easiest conflict, the reasons why a couple of characters can’t be together is one or the other is married to someone else. Well, that’s an easy conflict; I find no challenge in that. It’s been done on television, in the movies, in other novels — The Bridges of Madison County or The Horse Whisperer — and there is just no challenge in that.

That’s number one, and number two, I just don’t want to glamorize it. It’s my own personal decision. I certainly would not be happy if my wife had a torrid affair, so why would I try to glamorize it?

It’s an error; that’s what bothers me. It’s like saying two plus two equals five. It just bothers me for that sake and the simple fact that it’s wrong. It’s not what I write in any way. I haven’t written a single book that could even be accepted as a romance novel. I mean, there’s a completely different voice. They’ve got very specific structures; they’ve got very specific character dilemmas; they end completely differently; and they’ve got certain character arcs that are required in their characters — I do none of those things.

It’s like you might as well say, ‘Why have I been bothered by not being called a thriller writer?’ Because I’m not –- that’s not what I write.

Most writers will face rejection at some point. How can they tell when their work is really good and when it’s time to move on or scrap an idea?

I will do that both in the mental process prior to writing or I’ll throw away a novel that’s 200 pages, which I did just last year for instance. I started to write Saying Goodbye. I was 200 pages in and I said, ‘This isn’t working,’ so I wrote Safe Haven instead.

That novel will probably be buried with me. Most likely, it will never come back, but elements of that novel will. And the different elements will appear in various novels that I write in the future.