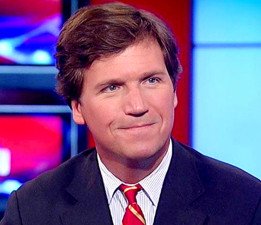 Tucker Carlson prefers not to pull a comb or brush through his hair.

It’s among his pet peeves.

So when Mediabistro visited with him in his downtown Washington, D.C. office on a recent weekday, it wasn’t too surprising that his thick wavy hair was awry or that he had donned washed out jeans, sneakers and a preppy red-striped golf shirt for the occasion. As editor-in-chief of The Daily Caller, the always-energized Carlson was busy moving into his new digs.

How did you come up with the name of your publication and what were alternative choices?

Oh, I can’t even remember. Every URL in the world is taken. We had all kinds of lunatic ideas. Daily Caller was crisp. It sounded like a newspaper, and best of all, it was available.

When you were contemplating your initial hires, who came to mind?

The very first person was [The Weekly Standard‘s] Matt Labash, who has a good job, but I thought he’d make a fantastic opinion columnist. In general, we found young, desperate people make great reporters, and they have vast reserves of energy.

How do you discuss the delicate issue of money when making a hire?

We’re very up front that we promise long hours and low pay in a cult-like environment. We also let people know that we might move to Guyana and start an agriculture cooperative. We are highly blunt in the interview process. But yes, we’re looking for cult members.

What are the basics of your day — when do you wake up, hit the office…?

I wake up at 6 and try to get some exercise in. Everyone meets here at 8:30 five days a week for a meeting. We go around the room, and we assign stories. It’s very useful. We assigned 11 stories this morning. We try to bang that meeting out in 30 minutes. This is a 24-hour operation.

We’re like L.L. Bean, we won’t shut the doors. We have a permanent overnight position. We have a lot of people here until midnight. We have a pretty good sense of the news. We want to succeed — bad. I scan 30 to 40 sites in the morning.

What is your managerial style? You don’t strike me as being too much of a micromanager.

Screaming. No, I’ve never yelled at anyone. I’m not a yeller. I’m not very self-aware, so I’m not sure what [my style] is. I try to be as direct as possible. I hope I am.

I understand you have a free-for-all attitude in your newsroom as far stories go. I heard reporters don’t have specific beats. How do you make this work? Aren’t reporters at each others’ throats?

No. There is a free-for-all atmosphere. I believe in individual initiative. I think in a year we will have reporters on beats, but I want to let that evolve. I also think that beats can be a problem because people become too [blinded] to the things they see. The tradeoff is you get reporters who don’t know as much. But in general, [having beats] dulls people. They get so inside they forget what readers may be interested in.

How did you make the jump from print to television?

Accidentally. I was a magazine writer and wound up doing a lot of cable news and the next thing I knew, I woke up one morning and was doing it full time. I never intended to do it.

Do you ever think about trying to return to television?

I don’t know. I like what I’m doing now. I go on Fox News a lot. It’s very fun to do — it’s different. It’s harder than it looks, at least for me. Fox has been really nice to me. TV requires you to figure out what you think and to state it clearly.

Do you think having a recognizable figurehead is important in launching a new online venture?

Well, the site isn’t about me. It’s not TuckerCarlson.com, The Carlson Post or the The Tuckington Post. I hope and assume it’ll run long after I’m gone. It’s not a vanity project, that’s for sure.

The front section is mostly original. We have a lot of reporters. Certainly the majority of the front page is original reporting.

How are you defining success for The Daily Caller down the road?

We’re well-read, influential and profitable. Like any business, if we’re here in five years, we’ve succeeded; if we’re not, we haven’t.

What do you hope to ultimately accomplish by having the The Daily Caller publish the Journolist emails?

I’ve never had a job outside journalism, and I’ve always defended the business against those (conservatives, mostly) who claim it’s fundamentally corrupt. The things I’ve read on Journolist make it harder to mount that defense. Conventional reporters from established news organizations, some of whom I know pretty well, were colluding on the most effective way to carry water for Democratic politicians. That’s not journalism. It’s repulsive.

Is there anything you’ve said on-air or in a story that you’ve regretted, and why?

Yeah, many things. I wrote a story one time about Sen. Bill Cohen that was so mean I can’t even think about it. He was fundamentally a nice person. I was cruel. I got carried away. I found his poetry — a lot of it was dedicated to his first wife. I see him every year [in Maine]. I always wince, and he’s very nice to me.