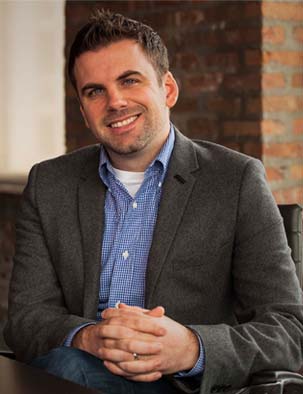 The Onion has evolved into much more than that satirical newspaper we all know and love. (Sample headline: “Obama Spends Afternoon in Garage Restoring Classic Drone.”) “America’s Finest News Source” has become a full-blown digital-media company that includes an alt-weekly entertainment news site called The A.V. Club and Onion Labs, its advertising/marketing layer that helps brands get their message across with sardonic humor and the all-important nod to pop culture via social media, video series and more.

At the helm of Onion, Inc. is Mike McAvoy, who’s been with the Chicago-based company since 2005. McAvoy oversees the advertising, product development, technology and finance departments. Together with his creative team and the newly installed senior vice president of Onion Labs, Rick Hamann, McAvoy is developing innovative, comedic campaigns that he and his clients expect to be the next big viral hit. Here, McAvoy gives us the scoop on The Onion’s foray into sponsored content.

Name: Mike McAvoy
Position: President of Onion, Inc.
Resume: Started out as a financial analyst at TCF Bank in Minneapolis, and then worked on an IPO for Capella Education Company, also in Minneapolis. Three years into his career, he got the opportunity to work as the controller at The Onion, where, he said, “actually my friend’s dad was the CEO, which is a great way to get into any company; it’s who you know, right?” In January 2007, he was promoted to chief financial officer; and then in July 2008 became the chief operating officer, overseeing all the sales and product and technology. Last year, he became president of Onion, Inc., managing all functions of the business.
Birthday: January 7, 1980
Hometown: Waukesha, Wisconsin
Education: University of St. Thomas in Minnesota
Marital status: Married with twin boys
Media mentor: Steve Hannah, CEO of Onion, Inc.
Best career advice received: Don’t be afraid to fail. And don’t be afraid of critics.
Last book read: The Circle by Dave Eggers
Twitter handle: @McAvoy_TheOnion
Guilty Pleasure: “Outside of drinking — no, I’m kidding. I like to play sports. I like to be active. But that maybe isn’t as guilty as drinking. Drinking and playing sports?”

It must be pretty fun working at The Onion. How would you describe the culture, especially having been there so long?

I think what’s great about The Onion is everyone here cares about the content; they care about the products, so you have this united front in that everyone wants to see The Onion flourish.

And in terms of the culture itself, everyone works really hard. It’s a very dedicated group. Everyone’s really smart, and they have to be in order to get the joke. That’s one of the nice things about creating smart content is you attract smart people.

And it’s highly collaborative. You know, it’s a culture that was built on collaboration. There are no bylines for the content we create, and that history of The Onion creative process has really been translated to the rest of the business culture and the product culture, where it’s very team-oriented.

Like so many other publications, The Onion has moved away from its roots in print. How has the company adapted to digital?

So I think The Onion, maybe like many of our peers who were in the print business, we knew that at some point the days of print were numbered, and we were able to focus on transitioning out of print.

In 2009, we developed a franchise licensing program, where we converted our print market to really just syndication deals, or licensing deals, as a way for us to get out of the print business and focus exclusively on digital, including video.

So in 2007, we launched The Onion News Network. In 1996, we actually went online, and we always knew that the way to grow the business was through digital, and by getting out of print, it allowed us to focus 100 percent on it, which has allowed us to pursue other ventures and create Onion Labs.

Great segue. How did the idea for Onion Labs come about and how did you land Microsoft as one of your first clients?

The idea of Onion Labs, or really creating content for brands, started years ago. We’ve always gotten requests from Fortune 500 brands to create content for them as part of media buys. And in the case of Microsoft, we were at the same media agency, using the same contacts that we call on to sell media placements.

We treated [that campaign] the same way we treated everything that we do on TheOnion.com. We went through a process of creating a ton of ideas that Microsoft poured through and ended up picking the one that worked the best for them.

So it became our pitch really as a business to evolve with the whole native-advertising movement, as well as advertisers’ decision to change how they tried to reach millennials. The more they realized they need to create custom content or have content created by people who are masters at reaching that audience, the more opportunity we had for Onion Labs. And hence, we officially began Labs in 2012.

Is the tone of the content you create for brands always “Onion”-like on some level?

It really depends on what someone’s trying to buy. Sometimes the creative direction from the advertisers or the goals are much more to create something entertaining than it is to create something satirical. It’s really a mix of whatever the initiative is.

Do you have a separate creative team devoted to sponsored content?

What we do, which I think is unique for many publishers, is we use the same writing talent that we have for our company, for all our brands running in the A.V. Club, to produce The Onion Labs content. And so the idea process starts with the same writers and the same team that creates the hit videos for The Onion News Network.

So in terms of total writing talent for the company, I think we have 20 or so writers, 25 A.V. Club writers who are on staff, and so it’s a mix of those writers who work on these types of projects, as well as we have ideas from various contributors and freelancers who also help out.

Who produces your videos—and what platform do you use?

We have a video team in house. And for bigger shoots, we add on resources. We have a great freelance network in Chicago that we’ve built. Some projects are 100 percent in house, some of them we’re using outside vendors, and it’s just really dependent on how much work we have and what other work we’re doing at the time.

We use YouTube. We’re one of their premium-content providers, so we have a deal with them where we are paid money to produce original content. We also distribute content that comes from TheOnion.com to YouTube, including these advertising campaigns, and so that’s all part of our network.

But we’ve grown TheOnion.com so dramatically that that really is our primary distribution platform. The audience that we’ve built on The Onion has grown a couple hundred percent in the last 18 months.

How else does Onion Labs incorporate social media?

Every campaign that we do has a component of social activation, social promotion. So all sponsored content runs through the context of—we’re promoting a tweet that will say something like, ‘Advertiser thought this sponsored post was a good idea.’

So here’s one [example]: ‘If you believe some websites still have the integrity not to shill for sponsors, you’re as dumb as we thought.’ So for any of the content we create, whether it’s for Microsoft or for DSW, Lenovo, Ford, Home Depot, any of those big brands, we’re positioning the sponsored content in that way. And we’ve also done business where we actually are running [clients’] social media accounts for the year.

Tell me about one of your most successful campaigns so far.

I think we’ve had quite a few that have been good and have gotten good plays. We haven’t had the Old Spice viral campaign just yet, you know, where we’ve gotten 100 million hits. But we’ll let you know when we do.

I think our most successful piece, our most viewed piece was an April Fool’s joke for YouTube [last year about the social-media site selecting the best video on YouTube], which has been seen by over 11 million people.

We do a lot of work that is behind the scenes, white label or work for hire, where we’re creating content for a brand and the audience, or the world, doesn’t know it.

How do you handle native advertising when it comes to your own content?

I think for our audience, we want to bring to life ideas that we’re excited about and get advertisers to sponsor them. And that’s the beauty of the Lenovo program. We brought to life a show called “Tough Season,” which was made possible by Lenovo, and if Lenovo didn’t write the checks and didn’t help us coproduce that show, it would never have come to be.

Another one that the A.V. Club has done is with Ford, and it’s called Pop Pilgrims; it’s really a travel show in which our editors are hosts and they talk about pop-culture sites and kind of give a back story as to why a certain location is relevant in the pop-culture community.